Skip to content
NORTHERN JOURNAL
Environment — March 16, 2015 at 8:48 PMFrom Across the North

For the first time ever, bird enthusiasts and conservationists are invited to enter the nesting grounds of the endangered whooping crane  this year, thanks to new programming from Parks Canada.

Staff at Wood Buffalo National Park (WBNP) have been developing tourism packages for several years to allow members of the public front row access to one of the North’s most iconic and threatened species. They have already started booking flights.

Birdwatchers can choose from three different Parks Canada guided tours of the whooping cranes’ nesting habitats, located at the UNESCO protected Salt Plains, which will be offered at various points in May, June and August.

The first package is a Fixed-Wing Flyover tour, which will take passengers over the area in a single-engine airplane, hovering about 1,000 ft above the nesting grounds to allow visitors to take pictures of the site without disturbing the birds. On this flight, visitors will also get to experience aerial views of the famous Salt Plains and the powerful Slave River rapids, a National Historic Site of Canada. This package will set tourists back $1,400.

A Heli-Flight tour will be available for those who want to get a little closer to the whooping cranes. With the helicopter, birdwatchers will get an even more intimate look at the birds’ nesting area from above and will even have the chance to land and tour on foot through the habitat. This package also includes a hike to a huge, naturally occurring salt mound on the Salt Plains. It will cost a total of $2,900.

Finally, more adventurous and athletic nature-lovers can take a Heli-Hike tour to the nesting grounds, where they will traipse through the wetlands to a camouflaged blind. Ideally, from the blind, watchers will encounter nesting whooping cranes and their little ones, depending on the time of year. At $3,900, this tour is the most expensive.

All packages include three days of activities around the region, from park excursions to local highlights such as the salt-encrusted red clay at Grosbeak Lake and the Caribbean-clear water and sandy white beaches at Pine Lake. Tourists will also get the chance to take in local cultural experiences in the town of Fort Smith.

Looking out for the birds

Some nature lovers have expressed concern over the birds’ well being, unsure whether the tours will disrupt the species during their nesting season when they are most vulnerable.

“At Parks Canada, one of our key mandates is protection, but it also includes visitor experience, public education and outreach, so those three are integrated together,” said Wood Buffalo National Park (WBNP) visitor experience manager Richard Zaidan. “We decided we’re not going to do the whooping crane tours if there are any disturbances at all to the cranes. We did a pilot study last year and this pilot study was to test any potential disturbances to the things that we’re looking at doing. This was based on expert advice, talking to people who have lots of experience with whooping cranes including biologists, people that have done research in there and people that have done our nest surveys every year.”

As the first rounds of visitors buy into the tours, pilot studies will continue to monitor the impact, if any, on the whooping cranes. To avoid any undue stress on the birds, no tours will be booked in July when the offspring, called hatchlings, start coming out of their shells.

Conservation efforts to protect whooping cranes and their habitats have been ongoing since the population hit its low point of about 16 birds in the 1940s. In 2000 they were officially declared as an endangered species and, as of last year, the population has increased to about 300 birds. In April, they are expected to start their long journey north from their winter home in Aransas, Texas to their nesting grounds in WBNP.

For more information or to book one of the packages, call Wood Buffalo National Park at 867-872-7960 or email atwbnp.info@pc.gc.ca.

Most people will never get to visit WBNP, Canada. And for those few who do, they will not likely get to visit the vast wetlands where the whooping cranes nest and rear their young. So for those folks who can’t make the journey, FOTWW is providing an array of photos of WBNP nesting grounds.

Click on photos to enlarge, and enjoy your journey to Wood Buffalo National Park.

In the first photo below, taken by John McKinnon, you are able to see the vast number of ponds used by the whooping cranes for their nests.

The photos below show what these ponds look like up close.

FOTWW thanks all those who participated in this year’s survey and provided us with the good news and photographs.

Parks Canada reports that there are currently 17 wildfires in Wood Buffalo National Park, nesting habitat of the endangered whooping cranes. Friends of the Wild Whoopers was advised that the fires are not a threat to the whooping cranes. Significant rain in parts of the park have helped fire suppression efforts. However, Parks Canada fire management personnel remain vigilant looking for new starts and will continue monitoring existing fires.

Due to the reduced wildfire hazard, Fire Information Updates from Parks Canada will no longer be produced daily, but rather as the situation warrants. The latest Wood Buffalo National Park wildfire information is always available through the Fire Information Line at (867)872-0107.

The Wood Buffalo National Park (WBNP) portion of the Pine Lake Road, the Parson’s Lake Road and the Pine Lake Recreation Area remain closed to all visitation and traffic until further notice due to a wildfire currently burning out of control in the vicinity.

WBNP Fire 2 is located four kilometres north of Pine Lake and to the immediate west of the Pine Lake Road and covers 35,665 hectares. A Parks Canada Incident Management Team and additional Parks Canada fire crews are working with local WBNP Fire Management in managing this fire.

A burn-out operation was carried out by Parks staff June 17 which reduced the volatile fuel sources between the fire and key values at risk in the area, including the Pine Lake Recreation Area and Pine Lake Road. The northern flank of the fire has entered an area that burned last year, which has limited growth in that direction. A high volume sprinkler system has been deployed to the Pine Lake area to use for facility protection should it be required. Today’s Danger Level and Fire Status Map.

This fire poses no threat to the community of Fort Smith. Friends of the Wild Whoopers was advised that the fire presents no harm to the wild whooping cranes that are currently nesting in the area. 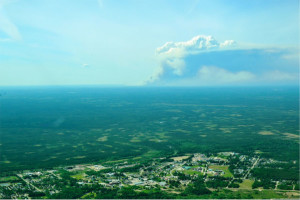 FOTWW would like to give a special thank you to John David McKinnon of Parks Canada for providing us with this aerial photograph of WBNP.