Kim Mann from Regina, Saskatchewan, Canada shared some interesting whooping crane information and photos with Friends of the Wild Whoopers (FOTWW). Now we will share Kim’s information with you. Kim wrote the following:

“On Sat May 3 2014, my sister and I were checking the grids south of Regina and Val spotted another Whooping Crane. The crane was standing in a field just beyond a slough full of Tundra Swans. He/she stayed for the day flipping over large clumps of vegetation, no doubt after any frogs hiding beneath. Unfortunately, the heat haze and strong winds made picture taking extremely difficult.  There is a good chance that later that day we spotted another 4 further south from the first individual but neither Val nor I could positively id those ones. They were just too far away and the heat haze too strong.” Kim and her sister referred to the juvenile whooper as “Junior” 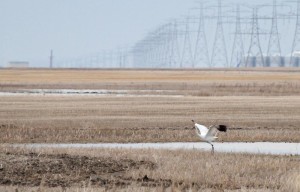 Kim sent FOTWW a video of her observations and explained: “ Glad to hear that the video CD arrived.  This was only the second time I have used my camera to take a video.  We are actually very far from “Junior” and the pics/videos are taken with a 400mm telephoto. We have seen Junior tossing huge sods of grass on a couple of occasions.  We think he is trying to find tasty creatures under the sod, perhaps insects, frogs, snakes or rodents.

“Regina, near where the video/photos were taken is the capital of Saskatchewan and is about 150 miles north of the North Dakota border.  The ecoregion is moist mixed grassland prairie.  Junior has been located just south of Regina in farm fields, usually in or fairly close to a slough, sometimes with swans and other times alone.  Currently the fields are still fairly wet from the snow melt so the sloughs are fairly large.  Attached is a pic of Junior by a slough and you can see another in the background.  These sloughs are just up the road a tad from the slough that Junior was in snoozing with the swans. “

“Whooping cranes tend to fly over Regina and the surrounding area during migration and on occasion, land in rural farmer’s fields; however, it is not common for them to be seen on the ground in this particular area.  A friend that has worked with wildlife suggested that the unusually cold temperatures may be causing them to land more frequently.  Also the day in April that we saw the four whoopers had a storm front complete with strong winds moving in.  For whatever reason it has been an amazing spring for whooping crane sightings – we have seen (but not confirmed- heat haze made it impossible to be sure) at least nine different whoopers on separate occasions!”

Just a note: The whooping crane is the large bird in the background. The birds in the water are swans and ducks.

FOTWW is very appreciative of Kim Mann for sharing her report. We love to get first-hand information from citizens who, like us, just love whooping cranes. So if any more of you Canadians and United States folks have whooping crane observations, please send them to us.