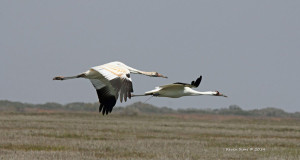 So, no it is not a ridiculous amount in comparison.

If the Whooping Cranes were not there, the refuge would not be there. It would be just another stretch of coast with chemical plants, shopping strips, and some weekend homes and a bay comparable in recreation, hunting, fishing and seafood quality to Lavaca or Nueces Bay.

Given that the “hunter” is hiding, expect to see a vigorous prosecution if he is caught rather than him stepping up and owning what probably was an honest mistake. With the money coming to the table, will be interesting to see if one of his friends turns him out or he cracks from worrying about whether his friends will turn him in.

Originally Posted By: BOBO the Clown-

While it’s sad and a bad deal that someone found the need to kill an endangered bird… The whooping crane has no bearing on the Aransas Wildlife refuge by itself. The refuge was created by Roosevelt in 1937 as wintering grounds for ALL types of Migratory waterfowl. The whooping crane wasn’t put on the endangered list until 1968. If the whoopers where gone tomorrow it would be sad and bad deal but the refuge would live on.

That’s like saying the refuge was created for alligators and it should be closed now since gators where removed from the list in 1987.

a private group actually tried to sue state of TX over the death of 23 birds in 2008-2009 for issuing river water permits that they claimed caused the starvation of those birds.

It’s a tricky situation when you start putting birds before humans.

Aransas county isn’t support by the Whooping cranes. It’s supported by humans that hunt and fish there and those that pay propertery taxes there. That would include me on all three accounts.

Sad and bad deal that one of our own may have killed an endangered bird. I hope they fess up, and take thier punishment

First, the Endangered Species Act did not exist in the 1930’s. At that time and still today, Whooping Cranes fell within the scope of the Migratory Bird Treaty Act, through an agreement in 1916 known as a “convention” and adopted into law in 1918 in the US. The MBTA was, (and still is) an international treaty ratified between the United States, Mexico, and at that time Great Britain as the governing body for Canada. The MBTA still provides obligations of the three countries to protect birds that migrate between the countries and it is the basis for the hunting seasons and bag limits for migratory birds such as ducks, geese, and Sandhill Cranes. This act is still in effect today and prohibits the hunting, killing, injuring, or “take” of all migratory birds including Whooping Cranes, except those specifically authorized for hunting as game birds. This is why shooting small migratory birds such as warblers, orioles, and others is a federal offense in addition to a state offense, as it violates the international agreement between the governments of Canada, the US, and Mexico. Even if the ESA was repealed, Whooping Cranes are still protected by the MBTA and shooting one still would be a federal criminal offense.

The ESA came into existence in its first form in October 1966, known as the Endangered Species Preservation Act. The first list of protected species known as the “Class of ’67” included the Whooping Crane. The new act carried forward the same framework, definitions, and regulatory framework of the MBTA, but extended it to other species.

As a note of history, the creation and funding of Aransas NWR were done through executive orders of President Franklin Roosevelt, who visited the area in 1937 for vacation and fishing. When I was young in the ’60’s and ’70’s, there was a tarpon scale on the wall of the Tarpon Inn in Port Aransas from a fish he caught.

The MBTA included the regulation of migratory game birds such as ducks, geese, coots, and gallinules – and also Cranes, both Sandhill and Whooping Cranes, which were legally hunted before then. In 1937 the year of President Roosevelt’s visit for vacation, the MBTA closed hunting of Whooping Cranes under the international treaty. In 1938, the Aransas Refuge was purchased with funds allocated to protection of the migratory species covered by the act. The Aransas Refuge was specifically created and managed for the benefit of the Cranes. The other migratory birds, not just waterfowl, were and are incidental beneficiaries, but the Whooping Cranes were the driving force for the creation of the refuge. Ever since, the Aransas NWR has been managed for Whooping Cranes as its priority, everything else is secondary on management goals.

With respect to the case, over 300 different individuals, groups, businesses, and governmental entities were plaintiffs bringing the suit. Among the group were Aransas County, the Aransas County Navigation District, the City of Rockport, the City of Fulton, the Republican Party of Aransas County, the Democratic Party of Aransas County, fishing guides, hotel/motel owners, commercial seafood producers, and businesses dependent on tourism related to the Cranes and the health of the bay. The reason they cared was because the Whooping Cranes were dying because the bay ecosystem was collapsing, and they depend on it for their own economic survival.

Your impression of “putting birds before people” is actually more of putting people and some large industrial users upriver over the interests of the people who depend on the health of the bay for their livelihoods.

The challenges facing the Whooping Cranes here in Texas are a warning like the canary in the coal mine. Whether any politician has the fortitude to stand up and say it publicly, we are at the limits of the carrying capacity of the land/water in this state right now. Every single drop of water in every single lake and river is committed to someone, somehow. Many rivers now are primarily filled with treated waste water. The Trinity River downriver from Dallas is essentially 100% treated wastewater, which is used, treated again, and passed on down river again. All of our bay systems are under extreme stress. There are huge economic interests dependent on these bay systems for all manner of business, tourism, recreation, seafood production, and businesses that support those.

Not that it matters one whit, but to me, conservation should be non-partisan. Presidents Teddy Roosevelt and Richard Nixon did more to protect wildlife and the ecosystems upon which they exist than most other presidents added together. For those of a religious mind, if God created this, should we not respect and honor his creation?