Whooping Cranes are a highly endangered species and is one of the rarest birds on the planet.   Currently the population numbers about 300 individuals, however, that population has shown a slow but steady increase since 1941 when only 16 individuals remained. Whooping cranes are migratory, spending the winter on the Texas coast and breeding in the Northwest Territories of Canada in Wood Buffalo National Park. The original wild population maintains winter territories in salt marshes in and around Aransas National Wildlife Refuge. As the Whooping Crane population has increased they have expanded their winter range so that today, only about half of the winter range is within these protected areas of Aransas and Matagorda Island National Wildlife Refuges.

As members of the Whooping Crane Recovery Team, we have identified winter habitat as the limiting factor to increasing the population of this wild, migratory species. In addition, a multi-organization, multi-agency, bi-national Conservation Action Plan highlights that a plan to ensure protection of all current and future potential Whooping Crane wintering habitats a high priority.  Since more than half of the Whooping Crane population winters on private lands – and in the future the percentage is likely to increase, finding mechanism to ensure the integrity of those lands as Whooping Crane habitat is a high priority. A recent evaluation conducted in conjunction with the International Crane Foundation and Harte Research Institute, shows that potential high quality habitat along the coast in Aransas, San Antonio, and Matagorda Bay systems will be a smaller proportion of potential territories within protected areas in the future. As little as 26% of all potential suitable winter habitat for Whooping Cranes will be within a protected area in the mentioned bay systems.

Reintroduced Populations Have Not Succeeded To-date

The importance of protecting actual and potential wild Whooping Crane wintering grounds has taken greater significance in recent years as attempts to establish reintroduced populations have not succeeded in establishing self- sustaining populations in other areas. Under the conditions outlined in the Whooping Crane Recovery Plan for potential down listing is that if no self-sustaining reintroduced populations have been established then at least 250 breeding pairs (1,000 individuals) should be in the wild population. This means that we need to ensure that at least there is sufficient acres to support 250 breeding pairs on the Texas coasts.

How Can Whooping Cranes on private lands survive?

There are potential conservation issues that must be considered when such a large proportion of the Whooping Crane population will be spending the winter on non-protected lands. Human activity on private lands is greater, generally unrestricted, and may pose actual or potential threats to wintering Whooping Cranes. Whooping Cranes on private lands may be exposed to direct and detrimental threats.  For example, disturbance factors associated with roads, boating, and hunting. In the past 3 years there have been at least 10 direct shootings and killings of Whooping Cranes while on their wintering grounds, in migration, and within the reintroduced populations. While direct killing was considered a serious problem in the past it was not considered to be a conservation issue at present until recently. Indirect impacts are present that may affect the availability of potential wintering habitat as many areas along the Texas coast are prime areas for urban developments, for example. So we must keep trying to understand and find ways to ensure that Whooping Cranes on private lands can survive in the future. 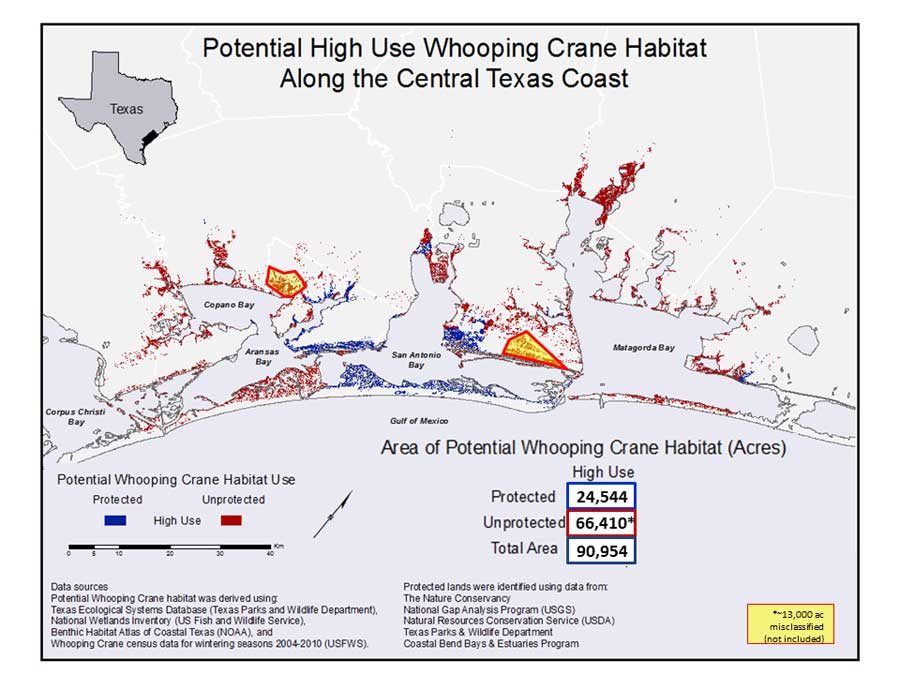 Figure Legend – Mapping of potential Whooping Crane habitat in and around Aransas and Matagorda Island National Wildlife Refuges shows that only about 27% of potential wintering habitat is within protected area boundaries, while 73% is on private lands (from Smith et al. 2014).