Some of the birds in the world’s only remaining wild population of Whooping Cranes have begun their annual spring migration back to their nesting grounds at Wood Buffalo National Park in northern Canada. The others will follow soon. They are repeating an event that has been going on for thousands of years. Following good conditions during the winter season on their Aransas National Wildlife Refuge winter grounds, the Whoopers appear to be in healthy condition. So, as the remaining Whoopers join the early birds and depart on their 2,500 mile migration to their nesting grounds there is hope for a successful reproduction and nesting season.

Traveling in small groups the Whoopers are expected to begin arriving at their nesting grounds during late April and May.

Friends of the Wild Whoopers is asking the public to report any Whooping Cranes they see along rivers, wetlands and fields. Report your observations to the wildlife agency in your state.

If you should observe a whooping crane as they migrate along the Central Flyway, please report them to the proper agencies. We have compiled a list of agencies and contact information below. If you need help with identification, please click on our Whooper Identification page.

Whooping Crane sightings at or near Quivira NWR should be reported to:
Quivira National Wildlife Refuge
620-486-2393
They can also be reported to this email:  quivira@fws.gov

Washington (July 10, 2018) – The U.S. Army Corps of Engineers (USACE) announced today the signing of a Memorandum of Understanding (MOU) with the Friends of the Wild Whoopers to assist in the recovery of endangered whooping cranes.

Per the MOU, USACE and Friends of the Wild Whoopers will jointly assess whooping crane migration stopover habitat at USACE water resources development projects. The assessments will be used by USACE to develop work plans that maintain and improve existing habitat and create additional habitat for this critically endangered bird as part of USACE Environmental Stewardship Program.

The whooping crane is one of the most endangered bird species in the world and is commonly seen as America’s symbol of conservation. Standing 5 feet tall with a wing span of 7 feet, it is the largest bird in North America.

Once fairly common, the species was reduced to just 16 birds by 1943. Market hunting and indiscriminate shooting along with habitat loss led to the decline of the species. Conservation efforts in the United States and Canada have seen the population increase to an estimated 431 birds in 2017.

This partnership is consistent with USACE’s responsibilities under the Endangered Species Act, which states that federal agencies may use their existing authorities to assist in the recovery of listed species.

Milford Lake was one of the many U.S. Army Corps of Engineer lakes that Friends of the Wild Whoopers (FOTWW) has visited and evaluated for possible whooping crane “stopover” habitat. As the largest man-made lake in Kansas, FOTWW is very pleased at what Milford Lake has to offer the wild flock of whooping cranes as they migrate along the Central Flyway. Read our report below to learn what we found about Milford Lake and its habitat. ~ Pam Bates, FOTWW

Milford Lake, a stand out as Whooping Crane Stopover Habitat

Friends of the Wild Whoopers (FOTWW) is continuing its efforts to encourage government agencies and Indian Reservations to manage portions of their lands to help wild Whooping Cranes. Whoopers and many other wildlife species often use the same wetland habitats and specific adjustments to portions of selected wetland sites could be beneficial to many species. FOTWW focuses its efforts on planning needed management adjustments and encouraging their completion.

FOTWW was pleased to have the opportunity to recently visit the U.S. Army Corps of Engineer (USACE) Milford Lake in eastern Kansas. The lake and surrounding land area has good fish and wildlife habitat and some excellent Whooping Crane “stopover habitats”. We were pleased to learn that Whooping Cranes have already begun using the lake properties along with tens of thousands of waterfowl and other critters that need wetlands and nearby agricultural fields to forage, rest and roost. Both USACE and Kansas Department of Wildlife, Parks and Tourism (KDWP&T) have joint management responsibilities on the lake and maintain ongoing agricultural programs to provide excellent, nearby foraging areas for Whooping Cranes and other wildlife.

FOTWW believes that Whooping Crane use of Milford Lake will continue and increase as their population continues to increase.

The USACE and KDWP&T have, with assistance from other parties, created and manage 10 wetland complexes with individual wetlands varying from 20 to 250 acres and totaling about 2,300 acres. These wetlands are regulated by water control structures, which allow for precise manipulation of the water surface and acreage. FOTWW was most gratified to observe the remarkable development and operation of these wetlands. Figures 1 and 2 are photos and maps of two of the ten wetland areas.

There are three stationary pumps and six floating pump structures to pump water from the Republican River to fill the wetlands. These wetland complexes provide manageable wetland habitat benefiting breeding and migrating waterfowl, shorebirds, wading birds and other wildlife species. They also increase habitat diversity in the upper portion of Milford Reservoir by providing habitat in the form on aquatic vegetation, shallow water, food, nesting, and resting sites

FOTWW appreciates the interest and cooperation of the USACE and KDWP&T officials. We are grateful to David Hoover and Ken Wenger of USACE. who led us on a tour of Milford Lake project and provided us with documents and photographs that assisted in our evaluation. And we are very appreciative of the tremendous work by Kristin Kloft, KDWP&T who manages and protects the wetland areas. 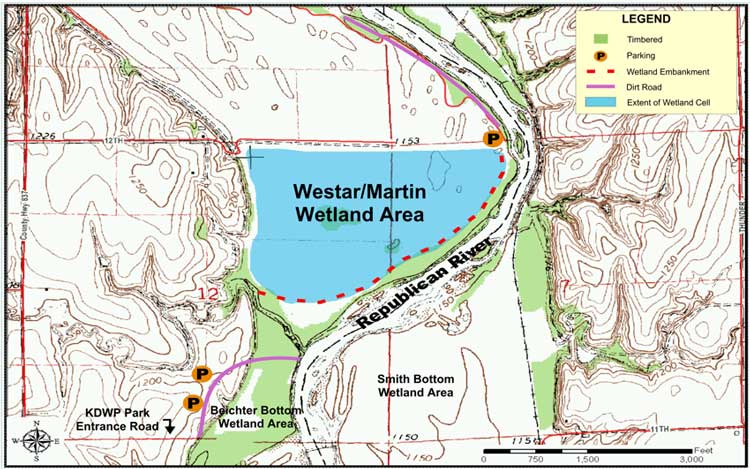 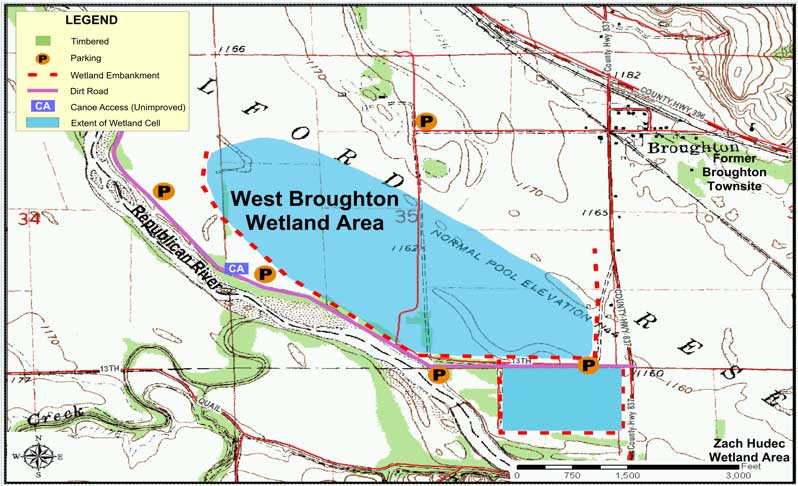 Kanopolis Lake is a reservoir in Ellsworth County in the Smoky Hills of central Kansas. The lake is formed by Kanopolis Dam and was completed in 1948 as a flood control and water conservation project of the United States Army Corps of Engineers.

The Corps manages Kanopolis Dam and Kanopolis Lake for the purposes of flood damage reduction, recreation, fish and wildlife management, and water supply and quality management. It also oversees 11,000 acres (45 km2) of land around the reservoir, conducting prairie restoration, prescribed burning, and tree planting in order to conserve soil and benefit wildlife. The Corps also leases 41 units of land totaling roughly 12,500 acres (51 km2) to area farmers to use with designated wildlife management requirements.

The Corps has an outstanding wildlife program on Kanopolis Lake according to Friends of the Wild Whoopers’ (FOTWW) President Chester McConnell who visited the lake a week ago as part of FOTWW’s continuing “Stopover Habitat” program. FOTWW is evaluating Whooping Crane habitat potential on Corps’ lakes and making recommendations to protect and improve where needed. McConnell explained that, “I have been very pleased at the Corps’ programs on the lakes I have visited and I have observed  lots of very good Whooping Crane habitat.”

Eight Whooping Cranes (5 adults and 3 juveniles) visited the U.S. Army Corps of Engineer’s Kanopolis Lake in Kansas this past weekend (Nov. 18-19), evidence that their habitat and wildlife management program is working.