Whooping cranes are the symbol of conservation in North America. Due to excellent cooperation between the United States and Canada, this endangered species is slowly recovering from the brink of extinction. There are several ongoing efforts by government and private organizations to protect and manage whooping cranes. The U.S. Fish and Wildlife Service and the Canadian Wildlife Service are the primary governmental agencies responsible as caretakers of the Aransas-Wood Buffalo National Park population (AWBP). These cranes nest in northern Canada’s Wood Buffalo National Park and winter on the Aransas National Wildlife Refuge in Texas. It is the only remaining wild, self-sustaining migratory population of whooping cranes in the world. Friends of the Wild Whoopers (FOTWW) is one of the private groups whose mission is to assist the agencies in their role.

FOTWW’s goals and objectives are:

Whooping cranes are the tallest birds in North America standing at a height of approximately 5 feet. They have a 7 ½ foot wingspan measured from tip to tip. 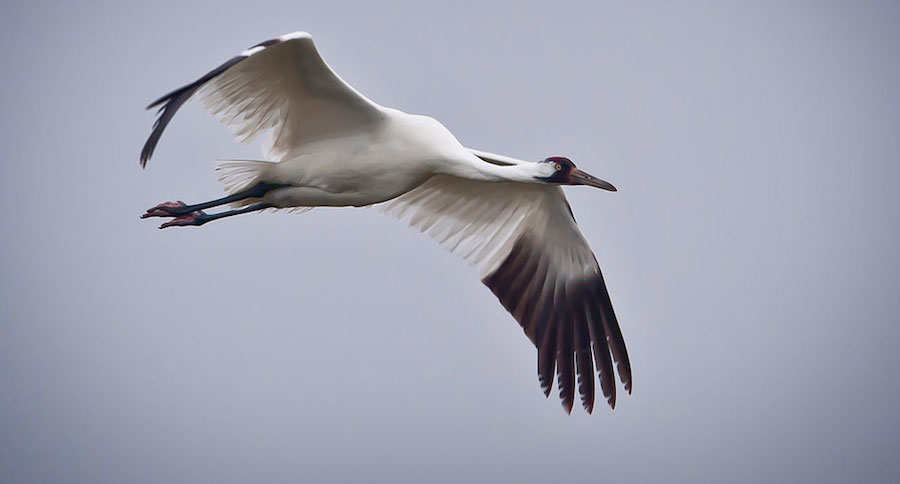 They weigh only about 15 pounds even though they appear larger. Whooping cranes are almost entirely white. The body and wing feathers are a bright white, except on the tips of the outer wings. The tips of the primary feathers are black and can be observed only when their wings are outstretched as during flight.

A large red patch on the head is an obvious characteristic of the whooping crane. The red patch extends from the cheek, along the bill and over the top of the head. The red patch is made of skin and is almost featherless. Their eyes are yellow and their long legs are black. While in flight, their long necks are kept straight and their long dark legs trail behind. Whoopers are graceful flyers and picturesque dancers.

Their calls are loud and can carry several kilometers. They express “guard calls” for warning their partner about any potential danger. The crane pair will jointly call (“unison call”) in a very rhythmic and impressive way in the early morning , after courtship and for defending their territory. The first unison call ever recorded in the wild was taken in the Whooping Cranes’ wintering area in the in December 1999 and is documented here. http://www.craneworld.de/rufe/schreiduett.wav 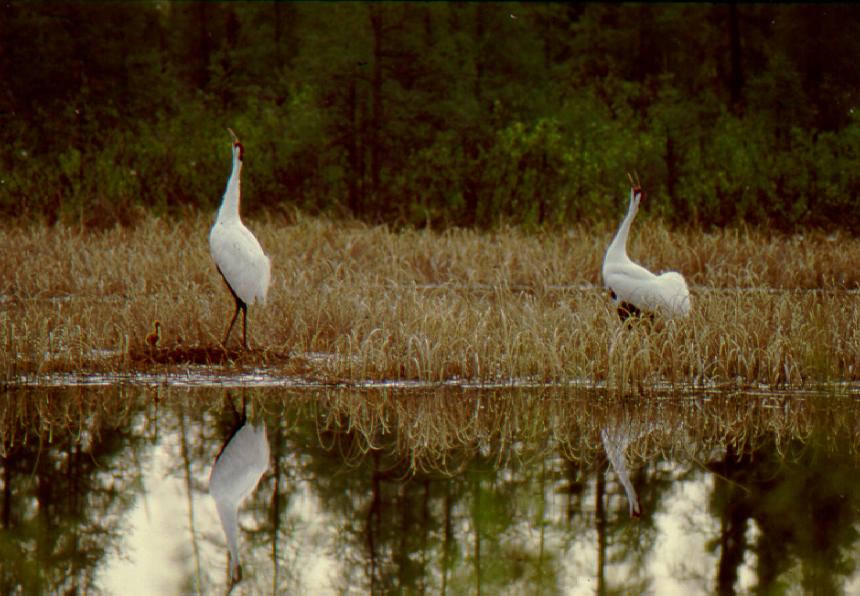 During the 1800s, whooping cranes were more abundant. Nesting was more widespread with records of nest in Iowa, Illinois, Minnesota, the Dakotas and northward through the prairie provinces of Canada, Alberta, and the Northwest Territory. Wetland drainage and clearing of areas for farming destroyed whooper habitat and hunting reduced their numbers. The only wild population that survived by the 1940s was the isolated one nesting in Canada’s Northwest Territory. This population struggled but, with improved protection and public education the slow increase of birds has continued.

The AWBP population increased from 16 individuals in 1941 to approximately 300 wild birds in September 2013. It is the only whooping crane population that maintains its numbers by rearing chicks in the wild. Efforts to increase the whooping crane population are ongoing in an experimental Eastern Population which migrates between Wisconsin and Florida. The Whooping Crane Eastern Partnership rears birds in captivity and releases them into the wild. Approximately 108 birds that they reared in captivity and released into the wild survive currently in this population. In addition, two experimental non-migratory flocks have been initiated in Florida (20 birds in 2014) and Louisiana (33 birds in 2014). An additional 162 whooping cranes are held in captivity to provide eggs to further increase the three experimental flocks and for research purposes.

Although there has been progress in increasing the numbers of whoopers, only one population maintains its numbers by rearing chicks in the wild. This flock now contains an estimated 300 birds that nest in Wood Buffalo National Park, in the Northwest Territory of Canada. After rearing their chicks, they migrate to Aransas National Wildlife Refuge on the Gulf Coast of Texas and bordering private land where they spend the winter. It is on this wintering ground where they are especially vulnerable. A chemical or oil spill could damage or destroy their food supply. Or a hurricane could destroy their habitat and kill birds. And a growing, equally dangerous problem is diversion of river waters that flow into the crane’s habitat.

Competition is severe for the fresh water which is being used upstream for agriculture, business and for human uses in cities. Litigation is in progress to hopefully settle this problem. The steadily diminishing flow of fresh water into the bays and estuaries is making the area less productive for whooping crane foods. These foods are essential to keep the birds healthy for their 2,500-mile migration back to Canada where winter is just ending. And once there the nesting pairs need reserve energy for producing more young.

During March and April the cranes migrate from Texas back across the Great Plains and Saskatchewan to reach their nesting area in Wood Buffalo National Park. Whoopers begin pairing when 2 to 3 years of age. Their interesting courtship involves dancing together and a duet called the “unison call”. Once pairs are bonded, whooping cranes mate for life. Females begin producing eggs at age 4 and generally produce two eggs each year. Typically only one chick survives but survival of both chicks is not unusual. Whooper pairs return to the same location (“territory”) each spring. If trespasser whoopers are in their nesting area territory, they are chased away. Nesting territories may include a square mile or larger area. Chasing other cranes away ensures there will be enough food for them and their chicks. During night whoopers stand in shallow water where they are more secure from danger.

When the whooper pair settles in, they build a nest in a shallow wetland, often on a shallow-water island. Their large nest typically measures about 4 feet across and 8 to 18 inches high. It is assembled from plants that grow in the water (sedges, bulrush, and cattail). The two eggs are laid one to two days apart so one chick emerges before the other. Parents take turns keeping the eggs warm and they hatch in about 30 days. Chicks are called “colts” because they have long legs and appear to gallop when they run. Young colts can walk and swim short distances within a few hours after hatching and may leave the nest when a day old. They grow fast so they will be strong for the imminent migration back south. In summer, whooping cranes eat crayfish, minnows, frogs, insects, plant tubers, snails, mice, voles, and other baby birds. Colts become good fliers by the time they are 80 days of age.

During September through November the adult whoopers lead their young and retrace their migration pathway to escape harsh winters and reach the warm Texas coast. As they migrate they stop occasionally to rest and feed on agricultural and weed seeds that fell to the ground as farmers harvested their fields. When they reach the Texas coast they live in shallow marshes, bays, and tidal flats. Pairs and their young return to the same area each winter. As they did on their nesting territory, they defend their winter territory by chasing away other cranes. Winter territories normally encompass 200 to 300 acres. Winter foods are predominantly blue crabs and soft-shelled clams but include shrimp, eels, snakes, cranberries, minnows, crayfish, acorns, and roots.

Individual whooping cranes may live as long as 25 years. However, they face many dangers in the wild. And while they can defend themselves and their young from many enemies, they must continuously stay on guard. Bobcats, coyotes, wolves, and golden eagles kill adult cranes. Crows, ravens and bears eat eggs and mink eat crane chicks. As they migrate, especially during storms or poor light, they occasionally crash into power lines and kill or injure themselves. In addition, they die of several types of diseases similar to all creatures.